On cool fall mornings with light north-westerly winds in the northeastern US the sky can be filled with the calls of migrating thrushes. Although they each have distinctive calls, there are going to be plenty of calls that remain unidentified.


Veeries in flight before sunrise (with a few Swainson's Thrush calls in background, Sep, PA). Veeries are the earliest of the migrant thrushes in fall. The calls are usually lower and burrier than those of Swainson's Thrushes.


Nocturnal calls are often bisyllabic, and may rise, be level, or descend a little, but occasionally a distinctly descending call is heard (Sep, PA).

A perched Veery (May, PA, Red-bellied Woodpecker and Hooded Warbler calling). Veeries often give their flight calls during the day or in between song phrases.

Swainson's Thrushes in flight, 65 minutes before sunrise, over my backyard in Elkins Park, PA, in early October. The calls often sound like a Spring Peeper.

In this case some of the calls sound doubled (Oct, PA). 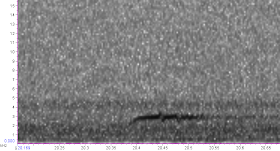 This is a call variant which is more completely modulated than the common call (Oct, PA).

In the above example, analysis of sonagrams reveals a whole spectrum of intermediate calls between these variants and the more common call on the left:

Swainson's and Gray-cheeked Thrushes also give their flight calls during the day (especially right after they have landed early in the morning). Perched Swainson's Thrush shortly before dawn (Oct, PA).

Individual birds often call a number of times as they pass overhead, making it difficult to estimate the number of birds that are calling. In this case, a presumed single bird is heard approaching, calling every 4-6 seconds, and getting louder as it nears the microphone (Sep, PA).


Some calls are best left unidentified. This call appears to be intermediate between Swainson's Thrush and Veery, perhaps leaning towards Swainson's. Note the completely modulated second call (Sep, PA).

Gray-cheeked Thrushes in flight 90 mins before sunrise (Oct, PA). The call descends and is higher than the Swainson's Thrush call, which rises.

Anomalous call, most likely a Gray-cheeked Thrush (4.38am, Oct, PA). 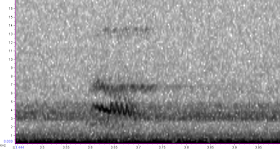 The nocturnal flight call of Bicknell's Thrush is reportedly higher than that of the Gray-cheeked, with a straighter appearance on the sonagram, and the highest point is at the peak of the initial ascent. The high point averaged 5.3khz vs 4.1khz for Gray-cheeked, and the end point 3.7khz vs 2.8khz in Bill Evans's paper (Evans, W. R. 1994. Nocturnal flight call of Bicknell’s Thrush. Wilson Bull. 106:55-61).
The following calls match those characteristics (with Swainson's, 4.27am,late Sep, PA). 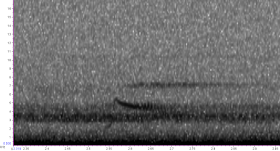 Another example of a possible Bicknell's Thrush, based on shape and high point, although the end frequency is relatively low at 3.3khz. Bicknell's calls tend to sound purer-toned than Gray-cheeked per Evans and O'Brien (11.53pm, early October, PA)

Note: Gray-cheeked and Bicknell's Thrushes have variable daytime calls that overlap. Our knowledge of the nocturnal calls is incomplete. These may well also overlap. Further research is needed.


The Hermit Thrush has a clear, descending flight call. It is the latest Catharus thrush to migrate south in fall.
(breeding grounds, July, ME) 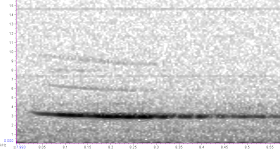 As with other thrushes, some calls are aberrant. In this case, the calls are buzzy and would not be identifiable were it not for a hybrid call at 14s (Oct, PA).

The Wood Thrush has a level, buzzy call (May, PA).

Some presumed (see Evans and O'Brien) Rose-breasted Grosbeak calls sound very similar, but with about half the degree of modulation of the Wood Thrush call, but note that any of the thrushes can make similar modulated calls, so the identity is uncertain. (Oct, PA).

Calls are given by American Robins in flight during the day, but robins are not generally heard during nocturnal migration, except along the coast (Jan, PA). 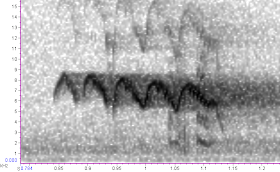 The six common thrushes have calls that can be fairly easily separated, but note that the Rose-breasted Grosbeak has a variety of flight calls, some of which can sound similar to Swainson's, Wood and Hermit Thrush (see Tanagers, Buntings and Grosbeaks:flight calls).
Here's two calls of presumed Rose-breasted Grosbeak, one a distinctive call and a second call similar to Swainson's Thrush (in flight 55 minutes before sunrise, with presumed Swainson's Thrush at 3 secs, end of Sep, PA)

The Scarlet Tanager is another species that calls during nocturnal migration (uncommonly in my experience), and could be confused with thrushes. The most common flight call is a clear high chu-wee; buzzier versions sound similar to Veery but are more bisyllabic (perched bird with White-breasted Nuthatch and Golden-crowned Kinglet, Oct, PA).

Unlike the other thrushes the Eastern Bluebird is a daytime migrant. It often calls from perches, as with this male (Feb, PA).